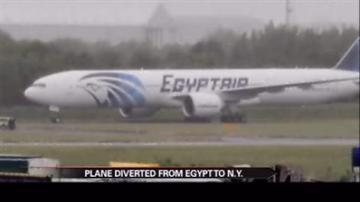 SCOTLAND — A flight from Egypt to New York came to an abrupt end after it had to be diverted to Scotland. The plane was rerouted due to a threatening note found in the plane's bathroom.

A passenger found the note in the toilet. She found it about three hours into the flight.

She said it was written in pencil on a napkin and read "I'll set this plane on fire."

She immediately told the crew who locked the bathroom and rerouted the flight.

All of the passengers on the flight were interviewed, but officials weren't able to determine who put it there.

Right now, officials are calling this a criminal offense rather than a terrorist act.