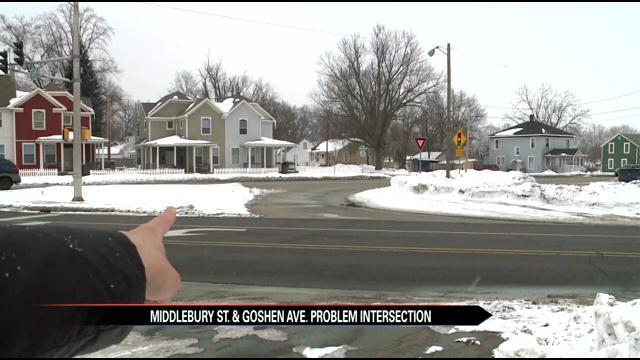 An intersection in Elkhart is still causing problems for residents and business owners. Last winter, ABC57 was at the intersection of Middlebury Street and Goshen Avenue talking with a homeowner about snow related traffic issues.

This year ABC57 viewer James Arbuthnot brought the intersection to our attention again.

“They still have yet to solve our problem here on Middlebury Street and Goshen Avenue,” says Arbuthnot.

Last year he said trucks got stuck trying to make the turn between a snow covered traffic island and snow banks to the right of it.

“Last year the city came out with a front end loader hauled it off one time no problem the rest of the year,” exclaims Arbuthnot.

He says removing the snow was a quick fix but business owner Brent Powell says the issues don't just happen in extreme weather.

“Since the island has been out there when they cut the corner we are having trouble with semis. They are over my property in the summer six to eight foot in all the time, black marks, skid marks where they are trying to turn,” says Powell.

Powell owns this corner lot where the trucks are getting stuck. He says he's been blamed for plowing snow from his parking lot too far into the street.

“I'm just clearing out my property and I'm keeping it way back in on my property and they are still getting stuck because they cannot make that corner,” explains Powell.

So we asked the Commissioner of the Elkhart Street Department if the issue is the snow or the way the road is designed.

“Semis, as they make that turn they go up on the side walk and they will end up pushing the snow back into the street. It's a real severe right angle and that's the problem,” says Marty Morgan, Commissioner of the Elkhart Street Department.

The right turn is a problem Arbuthnot says he's brought up before and may have to bring up time and time again.

“We have to put up with it we come home sometimes and there will be a truck stuck here and we have to go around them or go around the squad cars trying to keep other people from running into them,” says Arbuthnot.
Share this article: