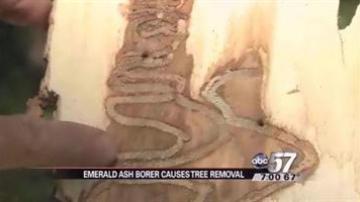 Crews are working to remove the infested trees so healthy trees across the state stand a chance. But, the tree take-down will drastically change the city's landscape.

More than 100 trees throughout the city have been infested and marked for the wood chipper-- 32 of those trees are right around the Double Tree hotel in downtown South Bend.

"It's really sad to see a whole block go down like this," said Brent Thompson, South Bend's City Forester. "because we weren't thinking ahead of time that you should only plant 15% of a species so this doesn't happen."

The beetle is destroying the trees from the inside out. It burrows a hole and lays it's eggs just under the bark.

"As the beetle grows it makes galleries in the bark and it kills the vessels that transport the nutrients and water to the tree," said Thompson.

The destruction is evident just by looking at the infested trees.

"You'll see the top die back because the bugs have already killed off the limb and then the bottom of the tree will sucker and put out a new growth," said Thompson. "But eventually the bug will travel down this limb and kill the new growth."

The city first found the infestation last Spring and tried to treat the trees with pesticide. This year, not only do the treated trees still have bugs, but the beetles have spread throughout the city.

The city plans to plant new trees to replace some of the damage, but it is not responsible for planting new trees on private property.

Fortunately, the Double Tree plans to replace the trees around its' property.

The city will be sending out notifications to private property owners with infested trees- requiring them to remove the trees.

*The Emerald Ash Borer is an invasive beetle from Asia that was first discovered in southeastern Michigan in 2002. The beetle only attacks Ash trees. Ash trees make up roughly 6% of the trees in downtown South Bend and 20% of the trees in Indiana. The Forestry Division estimates that all of the Ash trees in South Bend have been affected.