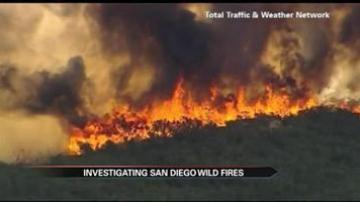 SAN DIEGO -- Firefighters in California are finally getting the upper hand on the wildfires that have burned dozens of homes. As the fire gets under control, the investigation begins.

San Diego was plagued by dozens of wildfires in a week's time causing speculation that arson is on the rise.

California's Governor Jerry Brown cites climate change as a factor in the fires.

The last three years have been the driest in recorded history in that state.