Investigation in deadly San Francisco plane crash is under way 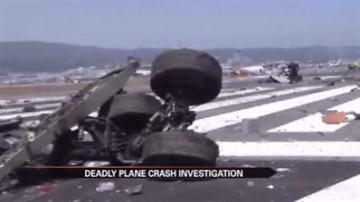 SAN FRANCISCO -- NTSB investigators are focusing on the final seconds before a deadly plane crash in San Francisco.

They are interested in what happened just before that plane hit the end of the runway.

The plane then broke off its tail and slid out of control.

Investigators are talking to crew members for more details giving them a rare opportunity to learn what went wrong.

"These interviews are incredibly helpful to our investigators. What we what to understand from the crew what they were thinking what they knew... what the procedures are what they are expecting... how they communicate with each other," said NTSB chairwoman Deborah Hersman.

The crew switched off auto-pilot just 82 seconds before the crash.It is not clear if the auto throttle was shut off or accidentally left in idle, which could have caused the plane to stall.

Investigators are also trying to determine whether a rescue vehicle killed one of the 2 teens who died at the scene.