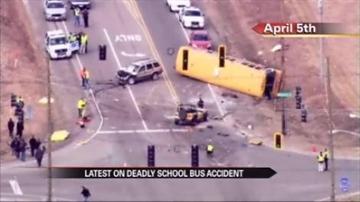 WADSWORTH, Ill. — Investigators are trying to determine who is at fault for the deadly school bus accident that sent 34 children to the hospital.

On Friday, a school bus driver collided with a Jeep Wrangler and rolled onto a Jeep Cherokee just one mile from school.

The driver of the second vehicle was killed and one student was hospitalized with a skull fracture.

Parents feared the worst when they heard the news.

"You walk in the hospital, and they're in the lobby waiting and playing," said Albert Moreno, a father of one of the children who was not seriously hurt. "It's a great feeling."

The driver and the passenger of the third vehicle were also injured but are expected to be okay.