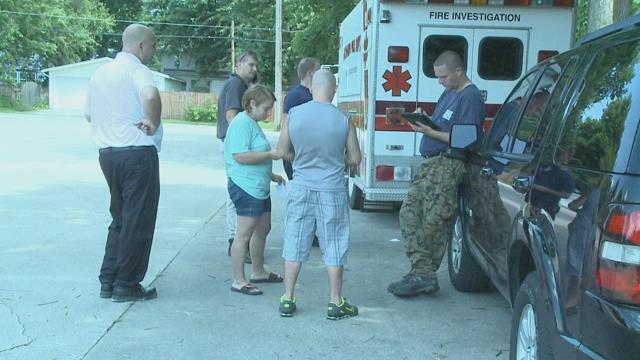 Goshen Fire investigators have determined that Thursday morning’s fire in a home on South Main Street was set intentionally.

The family of four, including two young children, were not injured as a result of the fire, but the home is a total loss.

Fire Investigator Scott Thomas also confirmed they've determined the family is not responsible for the fire.

“I’ve lost everything, our house is destroyed, we’re relocating, where do you go from here? How do you get answers for what’s happened? Who rights these wrongs?” said homeowner Ronny.

Ronny did not want to give his last name in order to help protect his family.

The family lost nearly all of their belongings in the fire, including their daughter's insulin.

The homeowner says he is scared the fire could be connected to three other incidents that happened this week as a result of an ongoing feud between his brother and a group of young men in the area.

Ronny’s brother Tony and Tony’s girlfriend Amy were involved in an incident Tuesday around 7 p.m. when their vehicle crashed into the Taco Bell in Goshen. Amy was driving.

According to a statement from Goshen Police, Amy was attempting to get away from a group of males she and her boyfriend had prior issues with.

Police say Amy has not been charged for the incident, which is still under investigation.

Police records show two more reports involving the family occurred within an hour of the incident at Taco Bell.

Ronny was outside playing with his children when he says he was approached by a group of teenage males who sprayed him with mace.

“They had weapons and threatened our lives, my children's lives. And said ‘We’ll be back.’ And now they’re back,” said Ronny.

Three minutes later, at 8 p.m. police received reports from neighbors that Amy and Tony’s apartment was broken into.

All three locations are within two miles of each other.

Multiple neighbors in the area say they’ve noticed an increase in crime recently, including cars being broken into, property thefts, and slashed tires.

Now that the fire has been found to have be set intentionally, fire investigators say that Goshen Police and the Fire Marshal's Office will be working to piece together what happened.

Officials are offering a monetary reward to anyone with information leading to an arrest.

They ask that those with information to call the state’s Arson Hotline, Goshen Police, or the Goshen Fire Department.