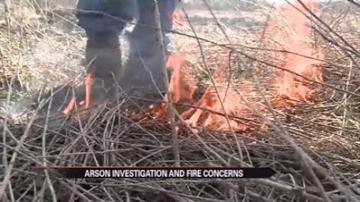 STARKE COUNTY, Ind. -- From last Friday through Monday, firefighters in Starke County have been called every night to fight brush or grass fires. Sunday night they had to fight two fires about three miles apart on the same road. Investigators say all of the fires have been intentionally set.

Their major concern is how fast the fires can spread.

Andy Tilleraas, the Assistant Fire Chief for the San Pierre Fire Department was the first one to arrive Friday night.

He says they were lucky to catch the fires relatively early.

"There is quite a bit of woods here and then on the other side of that woods. I know there's more grass area like this; it could go on for probably a mile at least,” said Tilleraas.

He says the fires spread quickly.

That's why Starke County Sheriff Oscar Cowen wants to catch whoever is starting these fires.

"It's obviously not safe, and it's a deliberate action, and it doesn't make us happy,” said Cowen.

Because the San Pierre Fire Department is a volunteer department with three brush trucks and a few tankers, Tilleraas says if one of these fires had reached the trees, things could have been very difficult to handle.