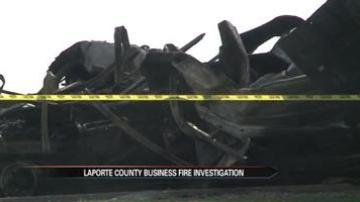 NEW CARLISLE, Ind. -- Local, state and federal agencies are investigating the deadly fire at K-Fex, Inc. that claimed the life of a New Carlisle firefighter.

Visitors continue to go to New Carlisle to show their respects to fallen firefighter Jamie Middlebrook.

He suffered from blunt force trauma and a broken neck. The fire chief says Middlebrook was outside of the barn setting a line to keep the fire from spreading.

Dittmer says it's standard procedure to send an investigator after a worker dies on the job.

In the next few weeks, IOSHA will be reviewing the incident to see if any policy changes need to be made or if there were any mistakes made.

The State Fire Marshal's Office and the Bureau of Alcohol, Tobacco, Firearms and Explosives will work to determine the cause of the blaze.

IOSHA will be looking for ways to prevent a similar tragedy.

State investigators are breaking down the timeline of events and are talking to witnesses both at K-Fex and the New Carlisle Fire Department.

"What we're really wanting to see is the organization to fix the problems, if there were any, that existed that might have contributed to the accident," said Dittmer.

Based on what they uncover, IOSHA could issue penalties or simply an order that tells the organizations involved what they need to do better.

We went to K-Fex to see how they have been dealing with the situation, but they called police.

The New Carlisle fire chief spoke with us off camera. He said his department is openly working with state and federal agencies in the investigation. He says this investigation could change how firefighters nationwide respond to emergencies.