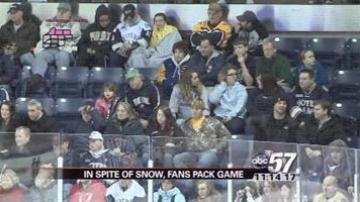 NOTRE DAME, Ind.-- The snow and cold may be keeping some people in but the Western Michigan fans braved the weather to cheer on the Broncos.

The roads were a mess with slush and ice, lkeeping many drivers off the roads.

And Notre Dame's campus is quiet. Students begin to return later in the weekend and classes start on Jan. 17.

But inside the Compton Family Ice Arena, the fans are anything but quiet. And it's not just the Irish fans feeling the noise.

"Western students and alumni support the hockey team pretty well and it's not far of a drive," said WMU fan, Joe Keinath. "So i think it'll be a pretty good turn out."

"It wasn't too bad until we got a few exits down 80-90," said Michael Dekeyser-a parent of a WMU player. "It got a little snowy then, but the trip wasn't bad at all."

"We came down today and it wasn't too bad, said Hennessey. "just a couple of slick spots."

"We came from Kalamazoo, Michigan to see the game tonight," said Keinath. "The roads are a little bad, but we made it."

And when we asked them if they thought twice about coming to the game in the poor conditions...

"I'm retired and I try to catch all the games I can," said Dekeyser.

"Snow can't be too bad, as long as they keep it plowed,"added Hennessey.

"No. For the broncos I'd go through pretty much any weather," said Keinath.

In fact, Western Michigan fans held their own against the Fighting Irish.

Despite the sloppy road conditions and threats of lake-effect snow, Broncos fans took their chances to support the team.