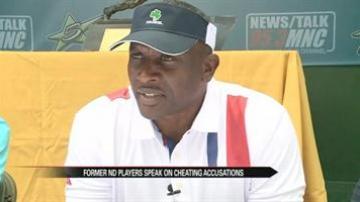 NOTRE DAME, Ind.-- The three Irish legends ABC 57 talked to today say when the news of the investigation broke, they were shocked, and they admit that balancing athletics and academics at the University of Notre Dame isn't easy. Monday, they shared with us how they made it happen back in their day.

“Being a player here and going through the academics here, it’s a very tough combination to deal with,” former Irish wide receiver and Heisman Trophy winner Tim Brown said.

Once you take the field as one of Notre Dame's Fighting Irish, you are accepting a major responsibility.

"You always have to keep the highest level of integrity and understand if you do that, you’ll be able to look back on this experience and know that you did things the right way,” Brown said.

Tim Brown, a former Heisman wide receiver is able to look back on his experiences at the university with pride.

“It was tough I tell people it was the toughest four years of my life, but I tell people if I had to do it again, I would do it because I really believe like I said earlier that it made me a man,” Brown said.

But not everyone walks into the university ready to step up. One legend tells us it wasn't easy.

“I wasn’t prepared for the fame and stardom that just came in one fell swoop,” former Irish wide receiver Rocket Ismail said.

Rocket Ismail says he had his fair share of stress away from the game.

“You’re tired and then you have to make sure you’re preparing for your classes properly,” Ismail said.

Intense practices and prestigious academic standards, just the tip of the iceberg when it comes to the duties and obligations of student athletes at Notre Dame.

“Then you’re getting ready for the next game of the century and those are difficult things to navigate,” Ismail said.

“Things happen. It’ll be straightened out and we go on from there,” former Irish fullback Neil Worden said.

Academic misconduct can happen at any level, anywhere and any time.

“Hopefully whatever is going on will come to an end pretty quickly here as for the investigation and they’ll put this thing behind us and be able to move on,” Brown said.