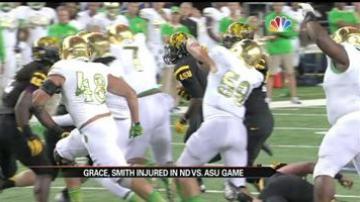 ARLINGTON, Texas — The Irish will now be two men down for the game against USC, as injuries in Saturday's game will sideline Jarret Grace and South Bend native Daniel Smith.

Coach Brian Kelly says both are likely out for the season.

Grace broke his leg during the game Saturday..

Smith broke his ankle in the first half of Saturday's game and is scheduled to have surgery sometime this week.

Smith is a senior for the Irish and he attended Clay High School.