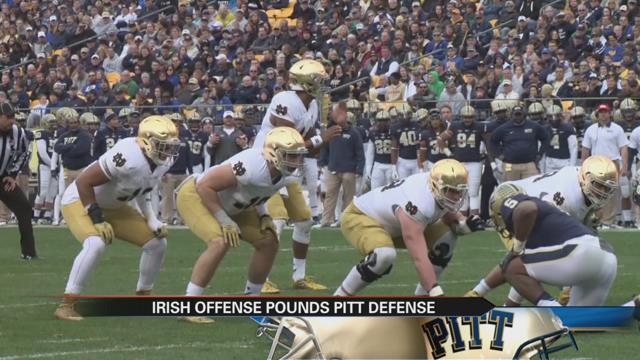 The Fighting Irish walk away with another victory after beating the Pittsburgh Panthers Saturday and keep their hopes of playing in the college football playoffs alive.

After an offensive knockout of the Pittsburgh Panthers, the Irish are improving in the process. It all started with dominance from the big guys up front.

"That was the emphasis. Put 6 or 7 on the board instead of 3 and I thought we did that," said Notre Dame Center Nick Martin.

The Irish put up 42 points on a respectable Panther defense, led by DeShone Kizer's 6 total scores.

Will Fuller executed indeed with 3 scoring grabs on the day he surpassed Jeff Samardzija for second all time in touchdown receptions.

"We knew we had to take those shots so it worked real well for us today," said Fuller.

Running back CJ Prosise had to leave the game early in the first half, putting freshman Josh Adams in to fill his role as the next man up.