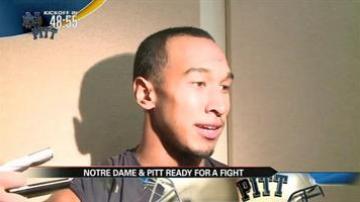 PITTSBURGH, Pa. -- Last year's Notre Dame - Pitt matchup can either be called heartbreaking - or a miracle comeback. Many Pitt fans are hoping for a win - and sweet revenge.

Last year's game ended with a goal line stand in triple overtime with Notre Dame pulling ahead by 3.

"Like any person who played in 3 OT and got a win I was excited I was happy everything went our way," said Stephon Tuitt, Irish defensive line.

Notre Dame knows there was a bit of luck on their side last year.

" I've never been in that was three overtimes and it was a nail biter a missed field goal late that gave us the ability to come back and score," said TJ Jones, Irish wide receiver.

Pitt's kicker Kevin Harper missed a field goal at the end of the second overtime-where they could have won the game.

Pitt rallied and made the next field goal, but Notre Dame answered with a touchdown.

A loss like that can fuel a year's worth of preparation for a rematch.

On Monday Pitt tight end JP Holtz told the Pittsburgh Post Gazette that he just doesn't like Notre Dame and thinks they're cocky.

There's no question the result of last season's game at Notre Dame Stadium is motivation for the Panthers-but for the Irish they just say they know what's coming.

The Irish say they always hear a lot of chatter about themselves but at the end of the day it's all in the preparation.