Irish players talk about what they're thankful for 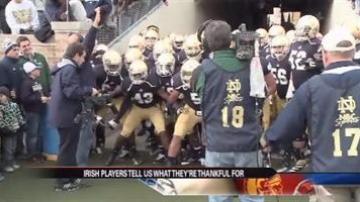 NOTRE DAME, Ind. -- The Irish are just 48 hours away from their final kick-off of the regular season.  And 11 and oh, there is a lot the Fighting Irish have to be thankful for.

"I'm thankful for everyone one of my teammates, my family, my friends, coaches and this awesome season," defensive lineman Kapron Lewis-Moore said.

With a number one ranking and a ticket to the national championship within their control, you would think the awesome season might be higher on their list.

"It makes you think of a lot things you're thankful for, you know I'm just thankful for playing and having to the opportunity to play this game, to be at this school, you know because a lot people wish they were playing this game and I'm thankful for that," said Louis Nix III.

But unlike there usual focused, one-game-at-a-time mentality, this team is thankful for the big picture.

"Everything that surrounds me, Notre Dame, my family, my brothers on the team, and this opportunity that I've been given," said center Braxton Cave.

"I'm thankful for my family, my teammates and this program that I've been surrounded by," said wide receiver John Goodman.