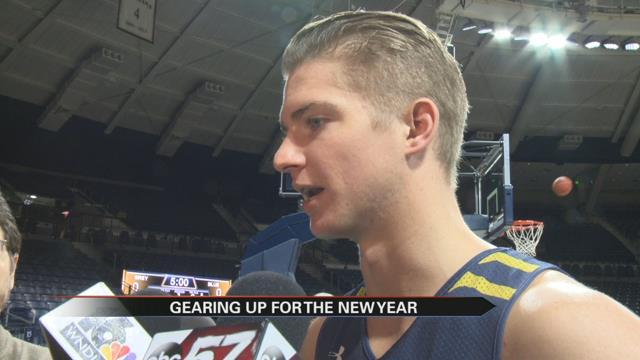 Break is over and the Notre Dame Men's Basketball Team is gearing up for the new year and the start of the ACC Conference schedule.

Monday, the 10-2 Irish were ranked the 24th team in the nation by the Associated Press.

The Irish take on St. Peter's Wednesday; one last tune-up before a rigorous start to 2017.

“We all know what we have to do to be better. You know, continue to do but be better in the second half more. I think that is something we all know we have to do. It's going to be a good test for us against St. Peter's to do that and make sure we carry out throughout the ACC season. This part of the season is over and it’s a whole new ball park now,” said Bonzie Colson, junior.

The team is not taking their final non-conference opponent of 2016 lightly.

“I think we want to rev it up. We want to get back to where we were at the beginning of the season, just being aggressive throughout the whole game, all 40 minutes, not just the first half. I think that is really hurt us in our two losses is that we came out all excited, but we didn't bring that same energy in the second half.  So I think this is going to be a great game to rev up and get ready,” said Rex Pflueger, sophomore.

The Irish start their conference schedule on New Year’s Eve at Pittsburg.