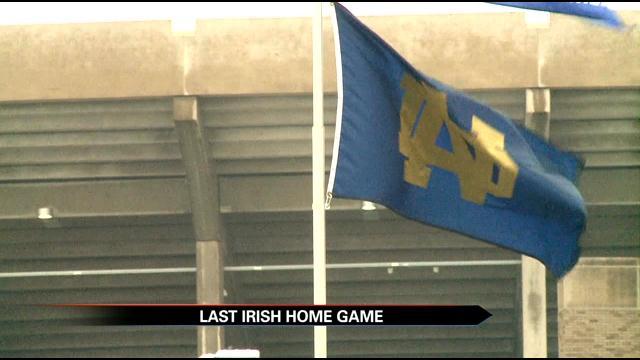 The weather Saturday was not the best for Notre Dame's last home game, but it was welcoming after the weather Michiana saw this past week.

It was even better than this time last year. Last year's final home game against BYU was played in freezing temperatures and it was the coldest game since 1991.

It is amazing what a difference a little bit of distance can make. Notre Dame fans were saying Saturday's game was some welcome relief from what the last couple of days, but the Louisville fans were saying it was freezing.

Those Cardinals fans said despite the conditions, traveling to South Bend was an opportunity of a lifetime.

“Definitely something to check off the bucket list. Everybody wants the opportunity to play Notre Dame, show them what you got and see what happens,” said Ashleigh Willinger, a University of Louisville alum.

Bucket lists were checked at Notre Dame Stadium, because it may be the last home game but a new rivalry could just be starting.

“Our first year in the ACC, a little bit different schedule than we're used to having,” said Louisville student Ryan Barber.

It is the very first match-up between the Notre Dame Fighting Irish and the Louisville Cardinals and the birds were flying high trying to compete with the blue and gold flags in the parking lots.

The two universities are only about 250 miles from one another, so many hopped on board to see the golden dome for the first time.

“I know there's a large catholic base in the city of Louisville, so I know a lot of Louisville fans came up today. Notre Dame, it speaks for itself, when you hear the name, you want to go,” said Barber.

“The experience is half of it, but definitely a Louisville win,” said Willinger.

Both teams went into the matchup with similar records.

It is a record the Fighting Irish are not too happy with after starting the season with a 6-0 start.

“We've had the opposite. They had a good start, and we've had a good tail end to the season,” said Barber.

Both are just hoping for a good ending to wind up in a decent bowl game.

Regardless of the schedules and both sets of fans being competitors, the Fighting Irish do not mind sharing their beautiful campus with new comers.