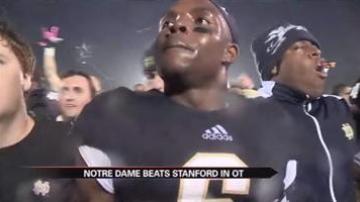 The Irish are 6-0 for the first time in a decade and what a battle to maintain perfection!

The Fighting Irish lived up to their name and legacy on Saturday night and the crowd's reaction was a great reward.

"[It was] a great college football game, great win, so proud of my guys and how they overcame adversity," said Coach Brian Kelly.

The Irish had sloppy start with a shaky offense. They had 4 fumbles in the first half and only managed to put points on the board after Irish safety, Matthias Farley's beautiful interception for a 49-yard return. Farley's play put the Irish in position for a 29-yard field goal attempt.

"I was like, OK, you can't drop this, the ball is coming and then once I caught it my thought process was just get as many yards as possible before getting tackled," said Farley.

But, the Irish came to life in the fourth quarter. They tied up the game early in the fourth with an 8 play, 52-yard drive that ended in a 24-yard touchdown pass to Irish tight end, Tyler Eifert.

"We had marched up and down the field a couple times and just made stupid mistakes and hurt ourselves, but yea to get that, everyone was very excited," said Eifert.

Stanford responded with a massive drive of their own, eating up 8 minutes on the clock and ultimately pulling ahead. But the Irish defense refused to give up a touchdown and the Cardinal got away with just a field goal.

The Irish offense fought through and came to close to a touchdown, but hit a field goal instead and tied it up 13-13 sending the game into overtime.

"You know we talked about it. No, I wasn't content. We wanted to score," said Kelly.

In OT, Tommy Rees was in for Everett Golson at quarterback. He connected with T.J Jones in the end zone, putting the Irish up 20-13.

Stanford had one drive to try and tie it up, but the Irish defense once again held an impressive line and put this game in the record books.

"The goal line, the game is on the line. That's where it's at. We have a lot of big-time players on our defense and they stepped up big tonight," said Manti Te'o, Irish inside linebacker.

The Irish said they'll let this game soak in for about 24 hours but on Sunday, they'll start focusing on next weekend's home game against BYU.