IUSB student facing punishment for having gun on campus 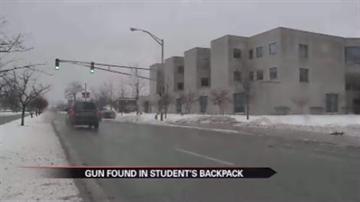 SOUTH BEND, Ind. -- Staff and students of IUSB have concerns after a firearm was found in a student's backpack Monday.

School officials say there's no reason for alarm, because it was an isolated incident.

Also, the student mistakenly placed his handgun in the wrong bag before stepping foot on campus.

"He's very apologetic about it," Ken Baierl IUSB spokesman, said. "We're trying to use it as an educational moment. Hopefully, it'll be best for everyone involved."

No state laws were broken, but the school's policy strictly forbids any sort of weapon near the classroom.

"You're encountering a lot of people, bumping into people, it goes off, and you could shoot somebody," Chinyama Munakampe an IUSB student said. "I mean, people shoot themselves."

"I wouldn't punish him academically. I would just point out to him, that it is pretty serious to bring a deadly weapon to a school setting," said maintenance worker John Ratkiewicz.

Due to privacy concerns, that student's identity is being withheld. The school says the investigation is ongoing.