IUSB students get out the vote ahead of first debate 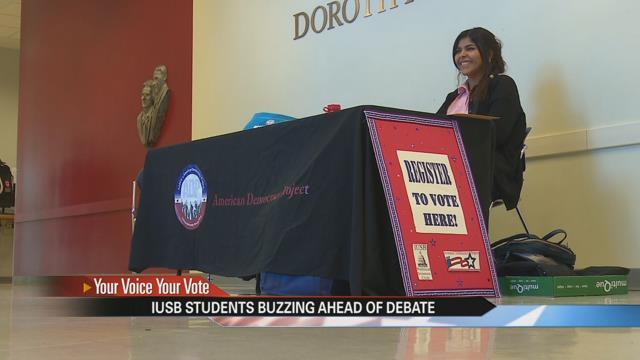 Ahead of Monday’s presidential debate, IU South Bend students spent the day getting out the vote and getting their peers ready for the debate.

“I’m interested because I want to learn how all these [processes] work,” IUSB international graduate student Fardaows Alshareef said.

So Alshareef spent her Monday afternoon learning by doing.

She is a graduate student from Saudi Arabia who was volunteering with IUSB’s American Democracy Project on Monday to get her fellow classmates registered to vote.

The group is pairing with other student organizations to help register students to vote throughout the week.

“You know, in my country, women just started to vote,” Alshareef said. “In 2015, women started to have this right to vote.”

So on the eve of Hillary Clinton and Donald Trump’s first one-on-one debate, Alshareef is helping promote democracy, though she said she was surprised to learn how many students are not interested in voting – about 20 percent of the people she had spoken with on Monday.

“They are completely not interested to register to vote,” Alshareef said of some students she spoke with. “When I ask them, ‘Ok, why? That’s your right.’ And they say, ‘That’s my right to not vote.’’

She said it’s tough to hear because all she wants to do is vote in her country.

“I’m so sad,” Alshareef said. “I’m sad that they have this right and they don’t use this right to hear their voice, to elect the government.”

But fellow IUSB classmate Matthew Kripp sees another side.

He’s secretary of the school’s political science club, and he gives his school’s level of interest in politics a healthy rating on a scale of one to 10.

“I’d say it’s about like a six or seven, given how big the student body is,” Kripp said.

For now, Alshareef will continue learning about democracy by helping it thrive, and she’ll watch Monday night’s debate as she preps for the time she’ll be a first-time voter.

“The first thing I will do when I go back home [to Saudi Arabia]?” Alshareef said. “I will register to vote.”