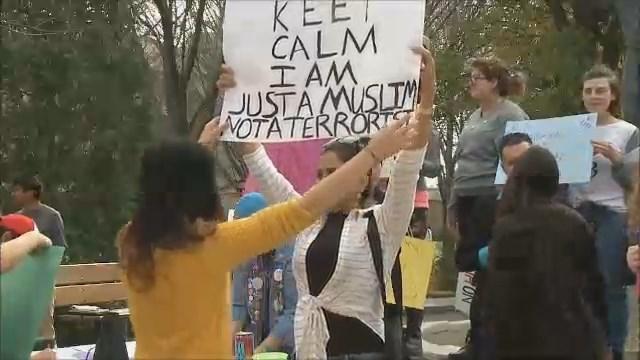 More college co-eds in Michiana are using their campuses to march and protest. Just one day after Notre Dame students held a demonstration, IUSB students gathered with a similar message on Thursday.

“It makes me feel helpless because I wish that they can see through my eyes that I want to be a better person and help in the society,” said Nargiza Amirova, President of the Muslim Student Associate Club at Indiana University South Bend.

The group collaborated with other minority groups in the middle of campus for continued concerns over the election of Donald Trump.

“I think it’s pretty clear that this election cycle brought out the worst in some people and a lot of hateful things were said,” said Michael McMillion, President of the Queer/Straight Alliance group at IUSB.

So they’re doing something about it.

“We want to act as a response to those hateful words and make sure they don’t drown out the positive message that we’re brining here today,” said McMillion.

One Muslim student has been in the U.S. since 2006. She says she’s afraid for the future.

“By having a fear that I cannot continue my school it will affect me and rest of other Muslims who identify as me,” said Amirova.

So she joined the demonstration with a sense of hope.

“All these misrepresentations that has happened through the elections, maybe these things could be fixed where we would not have to fear anymore when we’re in the public,” said Amirova.

“It’s really about supporting each other. We’re gonna make sure that our message is continued to be heard,” said McMillion.