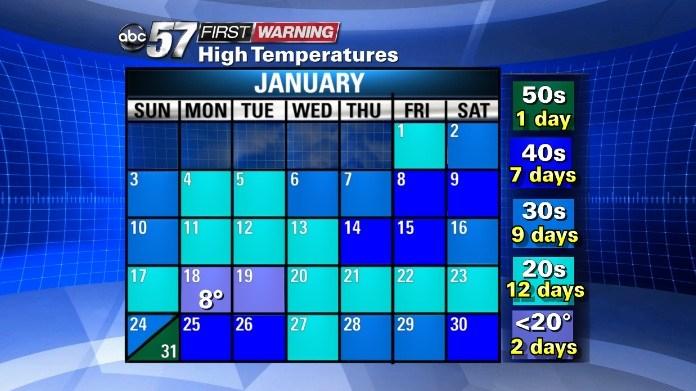 Across Michiana, January 2016 has seen it's temperatures swing from just an eight degree high on the 18th to reaching into the top 5 warmest on January 31st with a high of 52° in South Bend.  Is that what we'll remember January 2016 for; it's aggressive temperature swings?

Let's take a look back at December 2015.  December 2015 will be known in the record books as the warmest December since records began for South Bend.  As we rang in the New Year, January 2016 wanted to let everyone know in Michiana that all of the unseasonably warm days we experienced in December were not going to join us for at least a week into the new year. As for snowfall, especially in comparison to the amount of snowfall that fell in a month's time for January 2014 and January 2015, this January was slightly below normal.  The normal amount of monthly snowfall for South Bend and the surrounding area according to the National Weather Service of Northern Indiana is 20.6".  For January 2016, we were just shy of the normal snowfall with an official total of 18.7".  Below is the month of January 2016 with a look at how many days we experienced no precipitation, rain, or snow.  The majority of the days are shaded in light blue, indicating snow, however most of those days reported a trace of snow or a rain/snow mix. As we look forward to the second month of 2016, stick with ABC57 News for the latest updates to your forecast here.