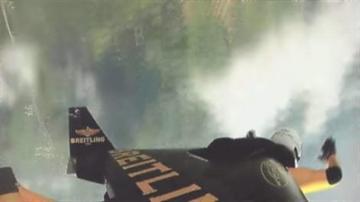 OSHKOSH, Wis. -- The world's first ever jet powered man made its debut at an air show.

The Swiss aviator showed off his invention by jumping out of a helicopter.

He used his carbon Kevlar jet wing with four engines to propel himself through the sky reaching speeds up to 150 miles per hour.

He controlled every move with a throttle at his hand.

"To have the opportunity to come as a performer here, and try to inspire other people with what I’m doing as jet man, as human flying, it's really gratifying,“ said the jet man Yves Rossy.

Rossy says he plans on adding a second jet man in the coming years and has already started training a student.