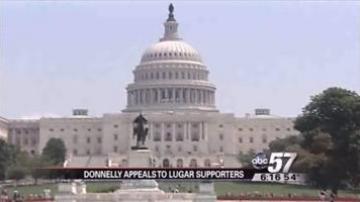 The South Bend Democrat appealed to Lugar supporters, on Wednesday.

Many Republicans said that they are disheartened by Mourdock's primary win and will cross party lines, to vote for Donnelly.

Republicans need to pick-up four seats to regain control of The Senate.

The Democratic Party has promised to pour money into the November election, to help Donnelly win.