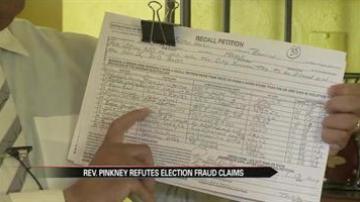 BENTON HARBOR, Mich. -- A judge has not decided if there will be a mayoral recall election in Benton Harbor on May 6th. Reverend Edward Pinkney is on house arrest for eleven charges related to the recall petitions.

"If there was fraud it was created by the sheriff's department or Sharon Tyler the clerk. If they decide to stop this election for any reason, we are asking Sharon Tyler to resign because she's the one who certified the signatures," said Edward Pinkney.

The recall petition is difficult to read. There are lines scratched out, dates are re-written and signatures are written on it several times.

The irregularities prompted an investigation and Pinkney was arrested on 11 charges.

He is accused of changing the dates on some of the signatures and allowing people to sign more than once.

"There was people who signed it twice, but I had no knowledge of it," said Pinkney. "It's obvious, why would I allow somebody to sign twice? If one person signs twice it's voided so that would be defeating my purpose."

He didn't deny the findings but blames human error.

"For the people who wrote the 8th they remembered it was the 9th and they wrote over it! I didn't have them initial it but I should have. I didn't think about it until later," said Pinkney.

Pinkney claims there are only two signatures that are duplicated on the petition.

If those are thrown out, Pinkney says there are still hundreds of valid signatures to get the issue on next week's ballot.

"There will still be enough signatures to have the election on May 6th," said Pinkney.

The judge is expected to make a decision on Thursday.