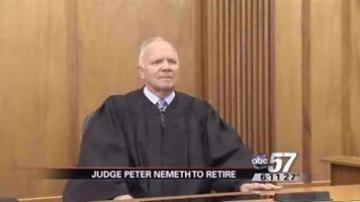 "I will not be seeking re-election to the office of judge of the St. Joesph Probate Court"

Before he became a judge, he was mayor of South Bend and served on city council.

Nemeth said his biggest accomplishment has been helping build The Juvenile Justice Center.

Nemeth also said, "It's a tough time in our society for families and children, especially the children and we've tried out darndest to do what's in their best interest over the years and I hope we've succeed in at least some regard."

The judge said, he's looking forward to spending more time with his family and if he can get good enough on the piano he may join The South Bend Symphony. Nemeth's term officially ends on December 31.