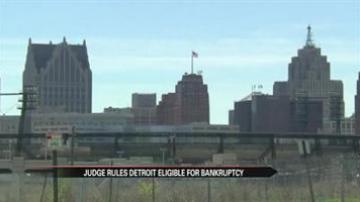 DETROIT -- The judge who decided Detroit is eligible for the largest municipal bankruptcy ever said the Motor City should have filed for bankruptcy a long time ago.

Judge Kevin Rhoades' decision means pensions for thousands of former city workers are on the line with billions of other debts to be wiped out.

Michigan's Governor Rick Snyder says it gives the city a chance for a fresh start.

"I was pleased to see the decision with the bankruptcy judge. I think it was a very thoughtful opinion that gives us the opportunity to move forward with turning around Detroit," said Snyder.

Detroit is eligible to wipe clean about $18 billion in debts.

Unions and retirees are expected to appeal the decision on grounds that cutting pensions at the bankruptcy level is unconstitutional.