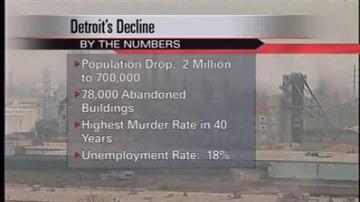 The Detroit financial manager defends the decision, saying that without filing for bankruptcy, it would have taken 50 years for the city to get out of debt.

Not only is the city billions of dollars in debt, but Detroit's population is less than half of what it was just over 50 years ago.

The homicide rate is also at a 40-year high. Unemployment is at 18 percent.