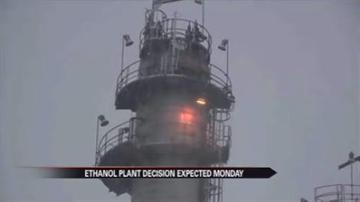 SOUTH BEND, Ind. -- A federal judge will decide in a few days whether or not the sale of South Bend’s ethanol plant to liquidators was legal. The liquidators closed the sale earlier this week and they say they’re losing money every day it sits idle.

The judge needs time to review the case and will announce a decision Monday.

"We want to make sure that plant's still there, ready to resume operations,” said Bob Salazar, CEO of Natural Chem.

Thursday in court his lawyers argued against Biditup and Maynards Industries. Two companies he says didn't play by the rules in last month's sale.

The original auction had a number of companies vying to purchase New Energy Corporation, but that's when NaturalChem says two of them, "Joined forces together illegally, to create an unfair advantage."

He's not sure which way the judge will rule, but hopes the city will support him in his desire to have a buyer that will operate the plant, and provide jobs to the area.

"With the potential of over 200 jobs coming to an area, plus people's property values maintaining, or even increasing, I mean, it's a win-win for us,” said Davis.

During Wednesday night's State of the City Address, the mayor touched on the importance of retaining area jobs.

He said 500 jobs could sway city unemployment numbers by a full percent.

His administration has remained neutral on who to support.