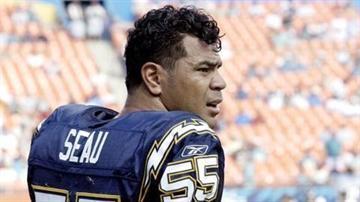 Former longtime NFL linebacker Junior Seau was found dead of a gunshot wound today at his Oceanside, Calif., home, and authorities are investigating his death as a suicide. He was 43.

At a press conference outside Seau's home, Oceanside Police Chief Frank McCoy said a woman who identified herself as Seau's girlfriend called 911 at 9:45 a.m. PT and told the dispatcher she had found Seau unconscious in a bedroom with a gunshot wound to the chest. McCoy said a handgun was found near Seau's body.

Seau's mother broke down in tears at the press conference, saying "Take me, take me, leave my son, but it's too late."

San Diego Chargers Chaplain Shawn Mitchell told ABCNews.com that Seau died of a "self-inflicted gunshot wound to the chest this morning." The Chargers also released a statement to ABC News' San Diego affiliate saying, "Everyone at the Chargers is in complete shock and disbelief right now. We ask everyone to stop what they're doing and send their prayers to Junior and his family."

Seau drove his SUV off a cliff in Carlsbad, Calif., in 2010, hours after being released from jail following a domestic violence arrest regarding his 25-year-old live-in girlfriend. Seau told police he drove off the cliff because he fell asleep behind the wheel, and police saw no evidence alcohol or drugs were involved, though some suspected Seau intended to commit suicide.

Seau played in the NFL for 20 years for teams including the Chargers, Miami Dolphins and New England Patriots. He leaves behind three children and an ex-wife, Gina Deboer.