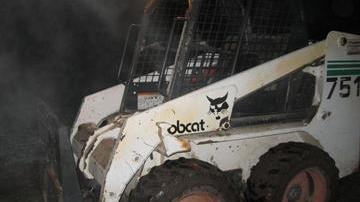 KOSCIUSKO COUNTY, Ind. – A 15-year-old is in custody after allegedly striking two squad cars with a skid-loader Saturday night.

The Kosciusko County Sheriff’s Office and Indiana State Police responded to the area of CR 250 West and CR 900 North in regards to a juvenile who was out of control.

Officers met with the juvenile’s parents who said the 15-year-old had become agitated earlier in the evening and locked his mother out of the house, according to reports.

He allegedly took a baseball bat and machete from the house and took off in a skid loader and crossed into an adjacent field.

Officers used the father’s ATV to attempt to catch up to the juvenile, reports said.

When the deputy and trooper in the ATV approached the juvenile in the skid-loader, he turned it around and rammed the ATV with the front pallet fork attachment, reports said.

"He immediately spun the skid loader around to the ATV and both of the officers bailed off the unit just as he was striking his own parents’ ATV,” said Chad Hill of the Kosciusko County Sheriff’s Department.

The teen then drove the skid-loader to where several marked squad cars were parked on CR 300 West. He then struck two patrol cars, one a Milford Police squad car, the other a Kosciusko County Sheriff’s Department squad car.

Officers tried to get the teen under control for an hour. He surrendered after being pepper sprayed, reports said.

“He had been sprayed slightly with some pepper spray but more or less it was that he was tired and cold and just climbed off the skid loader,” said Hill.

He was taken to the Pierceton Woods Juvenile Detention Center.

He was taken to court Monday for his initial hearing. He was returned to the detention center where he will remain until his next dispositional hearing on December 27.

He faces two charges of aggravated battery with substantial risk of death or injury.