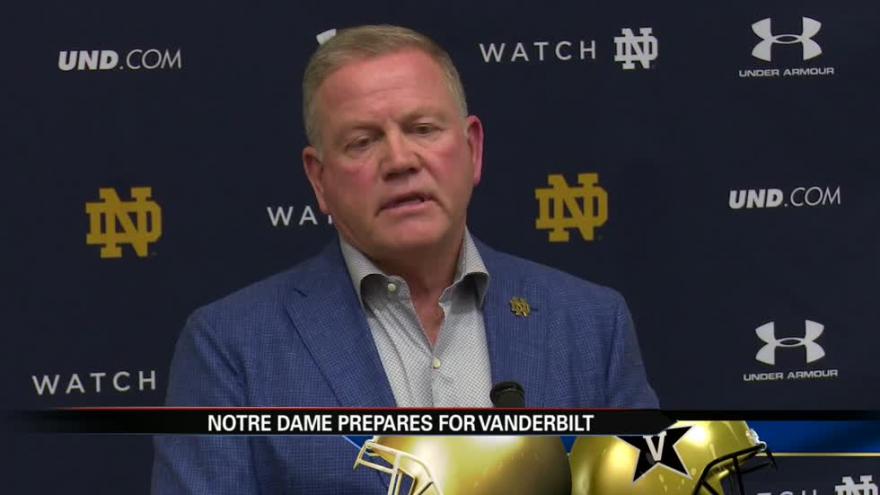 NOTRE DAME, Ind. -- The Notre Dame football team may be off to a 2-and-0 start this season, but Head Coach Brian Kelly is not satisfied with his team's performance--especially Saturday against Ball State.

Coach Kelly says the 8th ranked Irish will have to play better if they want to beat Vanderbilt this Saturday.

A key to Notre Dame's success is the play of quarterback Brandon Wimbush. He led the team in rushing in game one, but had minus 7 yards on the ground against Ball State.

Coach Kelly has said they want to allow Wimbush do what he does best, but he had just 11 rushing attempts against the Cardinals.

"A lot of our run plays are designed within a play itself. A pass play could turn into a design run based upon what he reads. I think what we have to do is continue to make sure that we pay attention to detail within our structure and offense. I think Brandon learned a lot from that game. What I mean by that is that he's given a lot of run-pass options. I wouldn't buy much into the notion that he's going to stop running, and we're just going to be throwing the football. What we really need to do is continue to work towards what his strengths are," Coach Kelly said.

Vanderbilt is also 2-and-0 coming off big wins against Middle Tennessee and Nevada with an average of 38 points per game.

Despite Notre Dame's similar record, the team has struggled to put opponents away.

Coach Kelly says the only thing that matters is the win.

"I think each situation is different, quite honestly. I just want to win games. I've never been about style points, what they look like, as much as trying to find a way to win a game. I think my entire career has been about if we need to run the football here, even though more points would be better, I don't want to put us in a position where we could jeopardize winning the football game. It's always been about time and place in the game, how you can win the game more so than what it looks like," Coach Kelly said.

While it's Kelly's first time facing Vanderbilt, it's actually his 4th time going against the Commodores Head Coach Derek Mason.

The two have gone head-to-head when Mason was the Defensive Coordinator at Stanford. Mason holds the upper hand with Stanford winning 3-of-those-4 against the Irish.