Kelly Park in South Bend getting a face-lift 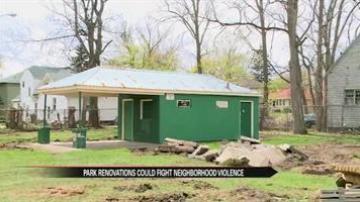 SOUTH BEND, Ind. -- Kelly Park in South Bend is going to be renovated and nearby residents hope it gives children a safe place to go. Crews hope to be done as early as June, but say it will definitely be done by August.

"I've lived in this neighborhood for 60 plus years, right across the street here and there have been no renovations, other than the pavilion coming up, minor stuff," said Luella Webster, Notre Dame Americorps representative.

Webster is the leader of the project.

Crews began tearing down the old equipment on Tuesday.

They hope to create a safe haven for kids in the northeast neighborhood.

"With all of the trouble that's going on in the city and kids not being able to go to decent parks and play, they're excited to come and play in an area where they feel comfortable," said Webster.

"I think that a safe place in the community is the important place to have, a place that children can feel it's safe to come to play as well as adults can feel like it's a safe place to gather," said Jennifer Knapp Beudert, manager of the Robinson Community Learning Center.

Webster says renovations are a way to fight back against the violence.

"We have to stand up and believe in what we want good for our children and if we something going on in the park, we can't be afraid to notify the police department," said Webster.

They are coming together to protect the children of South Bend-and to inspire others throughout the city to do the same.

"Hopefully this will serve as an inspiration for other neighborhoods wanting to come together and put improvements to the neighborhood and their parks and to show the power of community collaboration," said Knapp Beudert.

The renovated Kelly Park will have a basketball court, a new pavilion, new playground equipment and a community garden.

Organizers say children living nearby played a part in the design process.