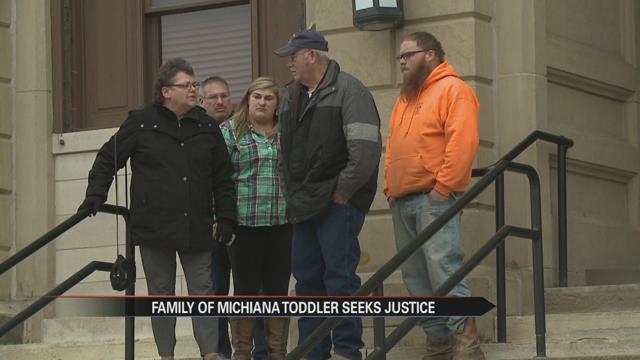 It’s been a taxing week for the family of Michiana toddler Kirk Coleman.

Just a week ago at the Garza family was at the State Capital pushing for change. On Thursday they were at Elkhart County Superior Court hoping for justice.

Jackie Rolston, the woman accused of causing the death of 19-month-old Coleman, was in court for her pre-trial.

Minutes before Rolston approached the judge it was a dreary day outside the court house.

For Angie Garza ever since losing her 19-month-old grandson there have been many dark days.

“To me even today it just seems like a nightmare I just can’t wake up from,” says Angie.

The Garzas attended the pre-trial for Jackie Rolston. This was a day they never imagined they would have to endure.

Rolston’s trial was set for June 6th. The Garzas were hoping the date would have been set before Kirk’s third birthday on March 17th.

“We were hoping to have some sort of justice for him by then but we will get it in due time, it will come,” says Angie.

Coming out of court Rolston was surrounded by family members and her husband blocked his wife from the camera.

The Garzas are looking forward to brighter days.

“Stay positive and I know Kirk’s looking down on us and we will make sure everything is good,” says Anissa Garza, Kirk’s mother.

On Wednesday, the Garzas got one step closer to making things good for Kirk.

Bill 357, which calls for a child abuse offender registry and is inspired by Kirk’s story; passed in the Indiana State Senate.

Seeing this type of progress encourages Angie to stay focused on her efforts to prevent this tragedy from happening ever again.

“As far as this court hearing and so forth we don’t have a lot of control over that. So our main goal right now is to get Kirk’s Law passed in session and go forward,” says Angie.

Senator Carlin Yoder says in the next week or two, Bill 357 will continue its process to becoming law and be sent back to the State House.