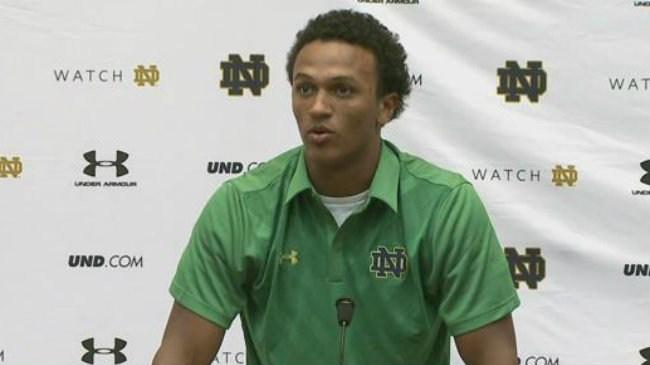 The wait is over.

Brian Kelly named DeShone Kizer his starting quarterback today ahead of Saturday’s game vs. Nevada. Kelly met with both quarterbacks individually on Wednesday to inform them of the news.

“He told me to prepare for Saturday as the starter,” Kizer said.

Kizer accounted for six total touchdowns in Notre Dame’s double overtime loss to Texas Sunday. He went 15-24 for 215 yards through the air, including 77 yards on the ground.

Malik Zaire is not expected to see time Saturday. The redshirt senior struggled Sunday, never really developing a rhythm. However, he is on pace to graduate this December, leaving the door open for a potential graduate transfer come Spring.

“In the last eight months, I've learned quite a bit about myself as a quarterback, as a leader, as a teammate,” Kizer reflected Wednesday in front of the media. “And from that I've definitely developed into someone I want to be for this season. Malik really challenged me and he'll continue to challenge me and I'm really grateful for the situation because once again I think it really helped me to develop into a guy who's willing to go out and compete play by play."

Notre Dame dropped to 18th in the Associated Press poll and 21st in the Coaches poll after their defeat to Texas and will look to get into the win column against the Wolfpack.

Be sure to tune in this Saturday to ABC 57 Saturday Kickoff from 10 a.m. to noon as Allison Hayes and I breakdown what this will mean for the Irish moving forward.