Knock-knock: It's time to move 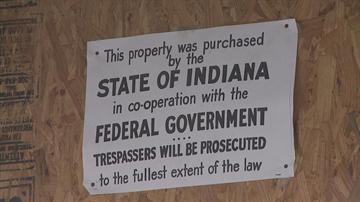 SOUTH BEND – In a row of seven houses down a single block on South Bend Avenue, more than half are vacant and soon, all of them could be empty.

Kenneth Moffett lives with his sister and her children on the block on the corner of South Bend and Duey Avenue. Without much warning, Moffett said people just started to move off of the block.

“There was people in there but they just got up and moved out of the blue one day.”

As soon as his neighbors moved out, windows and doors were boarded up and signs were posted in front of the three homes next to Moffett.

“Their house was bought out by the government, I guess to make the street wider,” Moffett said.

Printed in black bold lettering, the signs read: “This property was purchased by the state of Indiana in cooperation with the federal government. Trespassers will be prosecuted to the fullest extent of the law.”

Moffett says the state bought the homes about a year ago, but no one has moved in. The state plans to tear the houses down to make room for more travel lanes on South Bend Avenue.

The plan is part of the State Road 23 widening project, according to a proposal from INDOT, from Campeau Street to Twyckenham Drive SR 23 will be turned into a four lane, divided highway.

The lanes will be separated by a raised, landscaped median with left turn lanes at side street openings.

There will be a barrier curb with a minimum of 5-foot sidewalks on each side of the roadway.

“Yeah, especially with the Notre Dame games. It would be nice to have four lanes, but I don’t think everyone should be expected to moved,” Moffett said.

According to a South Bend Neighborhood Development Area Plan, the state has been working on this plan for more than ten years now. INDOT first proposed an idea to expand South Bend Avenue from Eddy Street to Twyckenham Drive in 1999 but neighbors protested and INDOT agreed to rework the project plan.

A few years after that proposal, city documents cited a report from South Bend's traffic engineers which stated that stretch of road (South Bend Avenue from Eddy Street to Twyckenham Drive) was “operating at a failed level of service.”

According to city documents, that means the road “lacks the capacity to safely and efficiently carry the amount of vehicles it does.”

Now, about a decade later INDOT prepares to move forward with its SR 23 widening project propsal at an estimated cost of $10.5 million and 7.3 acres of residential property.

“They’re trying to get everybody off this street just to get the lane wider,” Moffett said. According to Moffett the state he and his sister have been contacted by the state in an attempt to get them to agree to move off that block and get out of their way.

Moffett said right now the state is focused on his block from on South Bend Avenue, from Duey Avenue to Burns Street, but there is still a lot of housing along that stretch of SR 23.

“We’re not really sure, other than, people got to move off the street,” Moffett said. Moffett, his sister, and his nieces and nephews plan to pack up and move, they just haven’t been able to find a place that fits their needs. But he said that need to get out before INDOT plans to break ground on the project, in the spring of 2012.

“We don’t want to get forced out so we’re actually thinking about moving, but we don’t know where as far as now,” Moffett said.