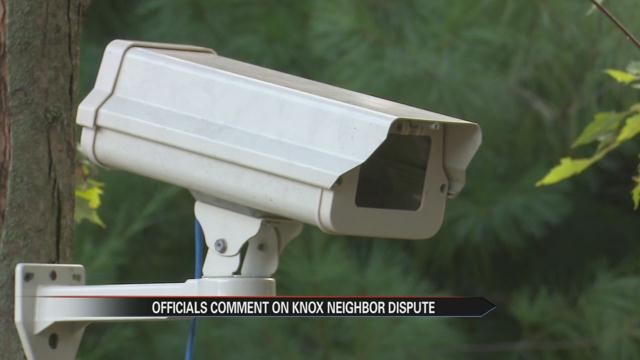 A feud between two neighbors in Knox could be tied to how close together their properties are. The widths do not meet current code standards.

Security cameras on both sides.

Both say they’re for protection, and both claim the other is lying.

“I wear this camera on my head, because my neighbor said he would call the police and make up lies about me,” said one neighbor Robert Cunningham.

“There’s been over 20 police reports on me that are false,” said his next-door neighbor, Jan Dollahan, Jr.

One of the latest accusations is that Dollahan allegedly shot at one of Cunningham’s security cameras.

Dollahan wouldn’t comment on this, because the case is still pending, but he did have a comment about the cameras.

“We have curtains on all windows. We can’t even open windows, because they have so many cameras pointing at our house,” said Dollahan.

“If you were to review the property lines in this case and see the layout of this property, it becomes pretty understandable how there’d be conflicts here, because of how narrow this property is. It’s not the only place in the county where we have issues like this, because of the way the properties are laid out,” said Starke County Prosecutor Nick Bourff.

“This property is 66 feet wide by 666 feet long. His property, which is to the north of ours is twice as long, but it’s to the same width,” said Cunningham.

That width does not meet current code standards in Knox, no matter which zoning district you look at.

“The houses are really close together. It’s easy to disturb one another,” said Cunningham.

These lots were laid out before the new code was put into place, so there’s not much they can do unless they reach a compromise.

And—both neighbors want to do that.

“I hope we can all act like decent human beings and get over this. It’s ridiculous.—It sounds simple, and that’s all we want. That’s all we ever wanted,” said Dollahan.

“All I really want is peace, to be able to come out into my yard in peace. It sounds simple, and that’s all

Each family has a protection order against the other, but neither one thinks it’s very effective.

At this point, however, authorities say the law has reached its limit.