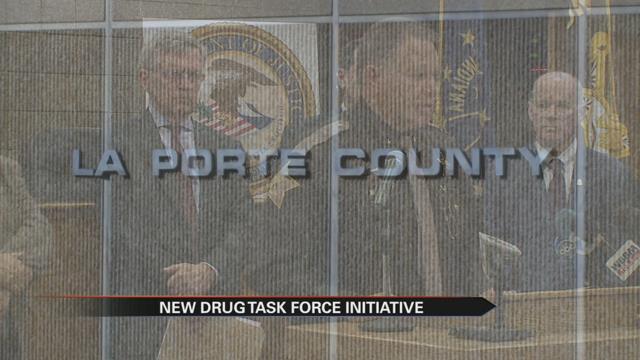 La Porte County is now part of a new initiative designed to reduce the influx of drug, gang and gun violence.This designation will allow La Porte County to use federal resources to fight against drug deals, while also increasing the public health of our communities.

It’s called High Intensity Drug Trafficking Area or HIDTA for short.Previously Lake and Porter Counties were the only HIDTA-designated areas in Indiana, but as La Porte County Sheriff John Boyd says, there’s not one community that’s immune from drugs and drug traffickers.

“We’re certainly not proud of that fact that we felt as though we needed a designation, but the first step in any recovery process is admitting you have a problem,” said Sheriff Boyd.

“The goal is to send all these dealers to jail, all these individuals that are causing so much heartbreak,” said Senator Donnelly.

“This didn’t give us a magic wand that we can wave and make the problem go away, what it's going to do is allow us to treat it on a regional standpoint," said Sheriff Boyd.

“We want to make sure that people aren’t stopping off to do their elicit business here in La Porte County.,” added Sheriff Boyd.

According to Lake County’s HIDTA Executive Director Charles Porucznik, funding for this initiative comes from the office of National Drug Control and Policy and is dependent on the designated are.

“Now the next step would be a funding process. We don’t know what that number is yet,” says Porucznik.

He says they’ve already reached out to Congress. For now, La Porte County is ready to get to work.

“… now it’s time to move on and start speeding things up and stopping drugs at their source which for us is Chicago,” said Sheriff Boyd.

According to Sheriff Boyd in December 2014 they were talking about planning to fight the drug epidemic. January of 2015, they started their designation process and 22 months later they’re now part of the solution.