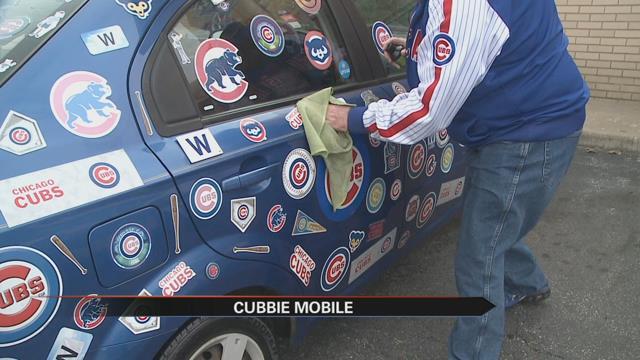 Over the years, a Michigan City super Cubs fan has slapped on countless stickers and magnets onto his vehicle and now he’s hoping his fandom, and his story, can get him to the World Series.

Scott Allen, has been rooting for the Cubs ever since he can remember.

As they’ve become better over the years, his car has become more decked out.

Every different type of Cubs logo you can think of, is all in one place on Scott Allen’s car in Michigan City.

What started as a small hobby, has grown into a reflection of his favorite team.

The Cubs have reached the playoffs in each of the last two seasons and Allen says that success has made him more enthused about slapping stickers and magnets all over his car.

Now his family is trying to reward their dedicated dad with a trip to the World Series.

“it’d be great but it’s so expensive, I’m semi-retired now and kind of on fixed budget my daughter set up this share account which is foreign to me so I don’t know anything about that kinda stuff but shes trying to get money to send me, hopefully enough for two cause I really don’t want to go by myself,” said Allen.