La Porte teen battles cancer after enlisting in the Army 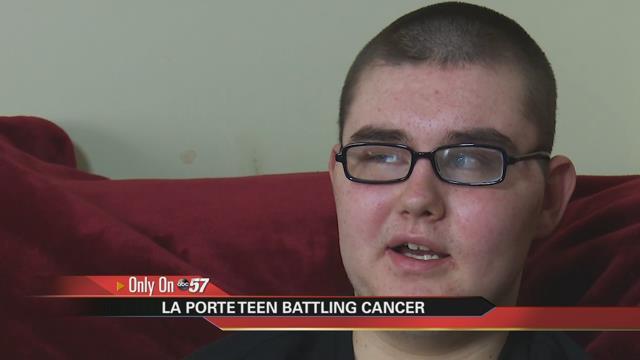 On May 4th, 17-year-old Shane Cornelison was sworn into the Army.  He was going to be a Nodal Network Systems Operator.

“I wanted to join the army because I wanted a stable future," said Shane Cornelison.  "I also wanted to serve my country.”

Like any parent, his dad, Rick Cornelison, was very proud.

"He was a normal kid.  Played baseball, hung out with his friends, went to school, did real good in school," Rick Cornelison said.  “Never had any problems out of him besides minor little things here and there pain in a butt kid just like just like everybody’s kids are sometimes.”

Shane said was an active kid who loved to play videos games and is a big Chicago White Sox fan.

Shane was having a great life, but things quickly changed for him.

“I was throwing up all the time, every day.  I lost weight," Shane said.

He lost about 45 pounds.

“We started seeing him real dizzy and you could just see the dizziness in his eyes,” said Rick.

“Had an MRI done, MRI came back same day, we were back in the doctor’s office the same day,” said Rick.  “Shane’s doctors took care of everything right away everybody was right on top of everything.  I couldn’t be anymore happy with the way they treated him and the way it turned out.”

On June 14th, Shane was diagnosed with Grade II Ependymoma.  It’s a tumor that starts on either the brain or the spine.

On June 21st, Shane had surgery to remove the tumor which was the size of a tennis ball.

“The most difficult part of the whole thing was seeing him after surgery,” said Rick.  “Ever since he’s came out of surgery day by day he’s only gotten better and better so that’s what we look forward to is him getting better every day.”

However, only part of the tumor was removed because of where it was located on his brain.

He now has trouble with simple things such as crossing the street and going down stairs because his depth perception is way off.

“I used to have great eyesight,” said Shane.  “I think it was 20/20 and now I can’t look left.  I have a prism in my glasses that helps bring the light over so I can see easier so I don’t have to turn my head as far.  If I don’t have the glasses on I have double vision and it’s blurry sometimes.”

His balance has also been affected and his right arm has lost some of its feeling.

Rick, a single father of four, quit his job so that he can be there for his son.

“I can’t go back to work ever since this happened.  Return to work is not an option as of yet,” said Rick.  “He’s got occupational therapy, physical therapy, speech therapy, they want to meet with eye specialists for his eyes there’s doctor appointments.”

Now at 18, Shane is slowly recovering.  He sometimes uses a wheel chair to help him get around.

“I’m getting my life back slowly,” Shane said.

In their time of need, love and support came pouring in not only from family but also their city.  Even professional athletes have reached out to Shane.  Chicago Cubs first basemen Anthony Rizzo sent Shane a letter and an autographed photo.

“I have a lot of support.  Everyone has just been awesome,” said Shane.  “They come up to see me at the hospital when I was in the hospital.  They’ve done benefits for me.  They threw me a surprise birthday party up at the hospital.”

Their support team has been dubbed as Team Shane.

“I think when the whole Team Shane thing started, I think I posted something on Facebook one day and something to do about his cancer and help the fight with cancer and I just put #TEAMSHANE and then everything kind of unfolded from there,” Rick said.  “Everybody in this town has come together over the whole Team Shane thing and I couldn’t be prouder of the town that I live in.”

Rick says that Shane has been strong and positive throughout all of this.

He is currently on the road to recovery.

“Right now I’m feeling mostly good,” said Shane.  “I have to go through therapy and stuff still but other than that I feel good.”

On October 1st, a second benefit will be held for Shane at the Moose Lodge #492 in La Porte, IN.  It runs from 12 PM to 9 PM CST. Click here for more information about the event.

And if you want to donate to Team Shane you can by using any of the various pay methods to Shane Cornelison at La Porte Community Federal Credit Union.