Lack of guardrail on Bond St. leaves many questions after deadly accident 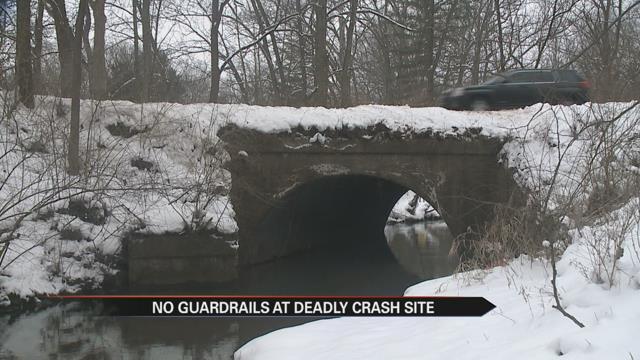 The deaths of two parents who had gone missing over the weekend has shocked the city of Niles, and now, many people are wondering if it all could have been prevented.

“This is my first time down here,” Niles resident Travis Rose said. “And it’s just, it’s a sad thing.”

Rose knows the mother of Steven Rough’s child, and on Tuesday, he came to the scene of the accident that left the boy without his father.

“Why is there no guardrails?” Rose said.

His question is one many people are asking after 29-year-old Autumn Mehl, a mother of three, and 26-year-old Rough were found dead inside Mehl’s car Sunday morning. The vehicle had gone off Bond Street and flipped into Brandywine Creek.

By Tuesday afternoon, a small memorial of flowers from friends and family rested nearby.

“It’s just unfortunate that it had to happen that way,” Rose said.

There are guardrails throughout the city of Niles, but only in certain areas.

A guardrail hugs either side of South 3rd Street where Brandywine Creek runs near, but just one block away, no guardrail or barrier of any kind prevents cars from running off Bond Street and into the creek that sits between 10 and 15 feet below.

Why does Bond Street not have a guardrail near the Brandywine Creek drop-off?

“Until we have completed our complete study of the accident, until we get the accident reports and all of those issues, we’re really just not commenting on that particular accident,” Berrien County Road Commission Manager Louis Csokasy said.

When asked what his team does to determine when a road needs a guardrail, Csokasy said it depends.

“What we tend to do is not look at any specific item, safety item, on the road,” Csokasy said. “We tend to look at the road from a holistic standpoint and then back that off into those individual areas, such as stop signs, warning signs, guardrails, those types of things.”

Csokasy said safety fixtures like guardrails are usually installed on roads that are being built or redone. He added that safety fixtures are also often put in after a significant accident, and investigation, reveals the need for some.

“When the investigation is closed, then we take appropriate action,” Csokasy said.

When asked if the commission has a policy that a drop-off of a certain height needs some type of guardrail or barrier protecting it, Csokasy said, “I’m not aware of any.”

Overall, he said guardrails are something dealt with on a case-by-case basis.

Csokasy said a lot of people have called the road commission voicing their concerns since the accident involving Mehl and Rough happened. He said any feedback from the community is appreciated because, he said, it helps his team figure out what steps need to be taken next.

Once an investigation is completed for any major traffic accident, Csokasy said, it normally takes the commission between two weeks and two months to install something like a guardrail.