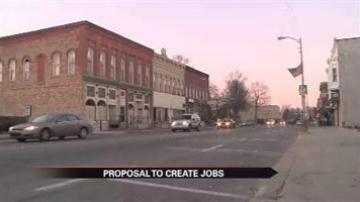 LAGRANGE COUNTY, Ind. -- "We see it as an opportunity to diversify our economy locally."

Keith Gillenwater isn't a gambling man, but he's seen the movie, 'Field of Dreams' enough times to know, 'If you build it, they will come'.

"Most projects are looking for buildings, they're not looking for ground," Gillenwater, President and CEO of the LaGrange Economic Development Association, said.

That's why he and other county officials are working to construct a building near the state line.

The hope is a new 75,000-square-foot facility will attract employers to the area, but it's no guarantee.

"You've got to put your cards on the table," said Gillenwater. "You've got to take some chances. We're thinking this is a pretty good bet to try."

Some folks in LaGrange said that's a lot of money to spend on something that might not pan out.

"For $4 million, you better have some sort of guarantee," said Marco Patton, a resident of LaGrange. "You want somebody to at least say they're going to move in there."

"It's a shot in the dark really," said Tyler Williams, another LaGrange resident. "But if it does happen, I think it'd be great."

If the project does go through, he and others will have a year to sell the space.

Otherwise, county taxpayers will be on the hook for nearly $2 million in interest payments.

Gillenwater said he's sure it'll sell though, because several potential employers have expressed interest in the county before.

"We've done all the due diligence we can," said Gillenwater. "So now, it's just saying, 'Here's an opportunity, do we take advantage of it or not?'"

But only time will tell if it was a bet worth making.