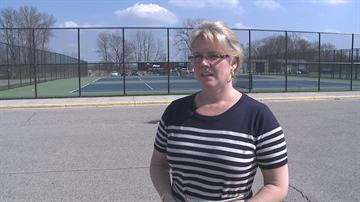 STEVENSVILLE, Mich. – A Lakeshore High School teacher is facing disciplinary action by Lakeshore Schools for a controversial test question she wrote on an exam.

Christine Schroeder, an Advanced Placement English teacher, wrote a fill-in-the-blank test question asking students to describe how some people see Benton Harbor. The answer to the question was "sordid." The word means 'dirty, filthy, or run-down’.

Schroeder’s vocabulary test was given last Friday. It read: ‘Many people assume that all areas of Benton Harbor are _____: they don’t consider the neat arts district with its cool restaurants and shops.’

Since word got out of the disciplinary action Thursday, a Facebook group started called 'Support Mrs. Schroeder'. As of Friday night, more than 2,000 people had joined.

Christine Schroeder was greeted by overwhelming applause Friday when she met with ABC57 News outside Lakeshore High School to talk about the test question.

Friday, Schroeder returned to class for the first time since being placed on administrative leave. "I, in fact, felt like I was supporting Benton Harbor," she said of the controversial question. "I had absolutely no intention of making a statement I thought was racially derogatory or inflammatory."

Students who are standing by Schroeder are having a tough time understanding the discipline. "We know she's not that type of a person," said Colin Rohn. Rohn helped start the Facebook group that exploded with membership Thursday night.

"I think some things were taken out of context,” Rohn said. “She's not that type of person." Rohn said the Facebook group’s popularity is an example of the student body’s love and appreciation of Schroeder.

ABC57 News called Lakeshore Schools multiple times Friday with questions about why Schroeder was placed on leave. As of Friday night, ABC 57 News has not received a call back.

Lakeshore Schools did email a press release with a statement saying: “The exam question did not reflect our commitment to a positive diverse learning environment.”

Schroeder said the exam question came from a previous conversation she had with students in her class and said she hopes the situation opens up a discussion about reflections of race in the area. "What I think this has illustrated more than anything is how deep of a need we have for that in our community," she said.

Cornell Burton, the parent who complained about the question to the school, told ABC57 News his daughter has received threats from other students.

Burton cancelled an interview with ABC57 News Friday under the advice of his lawyer. Burton said he is seeking legal options against the school.