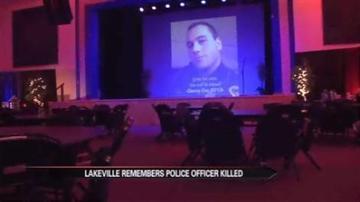 LAKEVILLE, In.-- Officers and the Lakeville community are honoring Danny Cox—a reserve police officer who died early Thursday morning when he crashed into a tree.

Danny’s mom and sister said they are mourning and asking for their privacy at this time.

Danny volunteered with the police department because he wanted to help those in the community, and make Lakeville a safer place for people like his sister Alice.

Danny Cox worked at Hilltop Grill with Iovino and she has known him since he was eleven years old.

"He just was a giver. He would do anything for anybody. I’m going to miss him terribly as an employee and as my best friend” Iovino said.

His death comes as a complete shock to the community.

“He really wanted to help people. He was a good policeman and he was kind and considerate. If he stopped you for a traffic ticket he was never rude and surly and just an all around good guy” Iovino said.

Police say he died after crashing into a tree Thursday morning while off duty.

They believe speed was a factor in the crash.

The Lakeville Police Department honored Danny at a fundraising event for their new K9 officer, Bishop.

They want to raise $1,000 for Bishop to have a bullet proof vest.

Danny's old boss, Lakeville's Chief of Police says the community can learn from this sad and sudden death.

Patrick Howard said, “Danny was always giving back to the community and the biggest thing I can urge the community to do as a way of remembering Danny is to just do the same thing, and try to help each other out as best as possible.”

The Chief said Danny wasn't driving his police car when he died, however Danny was trained to handle cars at high speeds.