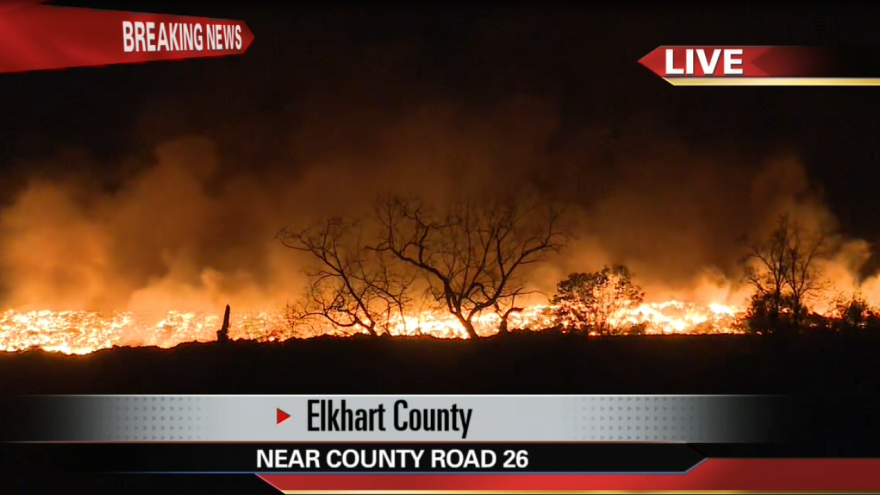 “Waste management is going to continue moving dirt and smother the flames throughout the evening. There is also larger equipment being moved in from Logansport to assist with the operation of moving that. There’s a meeting here at 7am and they will re-assess the situation that has happened overnight with wind and wind change and expansion of the flames. Air operations have stopped for the evening and fire department will re-assess when they re-convene,” said Hoffman.

The EPA, along with the National Weather Service, continues to monitor the air quality and weather.

“Despite the smell and smoke, the air is not a health risk at this time,” aid Mayor Neese.

Around noon, a helicopter flew over the scene so the fire could be assessed. At that time the fire was contained to less than one acre and was only knee high.

Around 4 p.m. thick black smoke and flames were visible at the landfill.

Nearby residents are asked to shelter in place.

CR26 is shut down between CR7 and CR11 - scroll down to the bottom of the story for a map.

ABC57 spoke with local fire departments about the varying safety precautions when responding to a fire like this as well as what the protocol is to battle it.
“We would refer to it as a defensive fire where, we’re just going to spray water on it, we’re not going to take any offensive actions to try and save it,” said Brian Kazmierzak, Penn Township Fire Division Chief.

Kazmierzak says, although there are pollution concerns with the different types of waste being in a landfill, it’s not worth the risk of rushing the process.
“When you think about it being in a landfill, you know, what is there to save? There’s no way you’re going to want to risk any firefighter’s life over burning trash," said Kazmierzak.

He and Fire Marshall Dave Cherrone with Clay Fire say this type of fire is unlike any other because of the layout of the land. Most house fires begin from the ground up whereas a landfill fire may happen on the surface and move downward making it more dangerous depending on what may be under the surface. Cherrone says it’s what’s under the surface that matters in a situation like this.

“Basically everything that you have in your house that should be disposed of differently that people just throw in their trash, there are probably bowl cleaner containers, maybe some old paint thinners, things that you should have disposed of at a proper facility is probably in that landfill,” said Cherrone.

He says these types of materials are not only feeding the fire but also creating the toxins that are being floated throughout the air.

Cherrone says a fire like this will take days to put out.

“It’s not something that’s going to happen by the end of today. They will probably be there for days and even after it appears to be out, somebody is going to still be there monitoring to make sure that it’s not smoldering in some area that you can’t see,” said Cherrone.