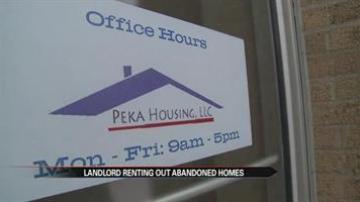 SOUTH BEND, Ind. -- The landlord of the woman whose door won't shut is also renting out homes that are on the city of South Bend's list of abandoned and vacant homes targeted for demolition. We tried to track down the landlord but have been unable to locate him.

Two days ago we reported Sheneka Johnson's living conditions. Her doors don't close, there's little to no insulation and the inside of her house is freezing.

We tried calling her landlord, Rodrigo Mellado, but weren't able to reach him.

So we stopped by his house. The person who answered the door said he lived there but that he was at work.

His office on Mishawaka Avenue was our next stop.

The office was closed.

On a list of 1,000 vacant and abandoned homes put out by the city of South Bend, 14 of the homes are owned by Mellado's company.

We stopped by a couple of the homes. The one on Brookfield, which is listed as vacant, has a family living in it.

We talked to the family off camera and they said they are renting from Mellado. They said their home is so poorly insulated that their heating bill was $700 last month.