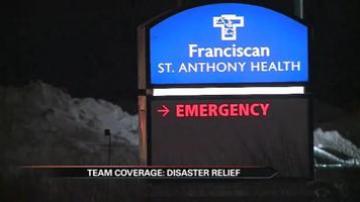 LAPORTE COUNTY, Ind. -- Once the news spread about how serious the I-94 crash was, first responders and area hospitals quickly activated their emergency response plans.

It took only a few minutes for 46 vehicles, semis, cars and SUVs to slide into a massive and deadly pileup on I-94 at mile marker 36.

Once the first 9-11 calls came in, Dr. James Callaghan got to work and activated the hospital's emergency response plan.

It's a smaller hospital tucked away near the lake.

That's part of reason they activate the emergency response plan more than some larger hospitals, especially in dangerously cold weather.

"We have to have enough people on hand to operate the hospital and treat patients even in really poor weather. So we have experience with having people stay, calling additional people in. We did that recently with the subzero weather," said Callaghan.

Thursday night the hospital had 13 patients.

"The worst thing you can do is to under-prepare whenever there's a possible mass casualty for a multiple car pile-up. So as soon as we heard that was a possibility and we might be getting patients, we just tried to mobilize as many resources as we could," said Dr. Neil Malhotra, emergency doctor at Franciscan St. Anthony Health.

One of those resources is the LaPorte Red Cross.

"We got a call from emergency management asking for help, state police calling, and so then we started into action," said Bobbi Petou,director of LaPorte and Porter County chapters, American Red Cross.

"We got pizzas for everybody so that was a big help. The mayor of Michigan City, the police chief worked with a couple restaurants so they had food at City Hall," said Petou.

The Red Cross also got dozens of stranded drivers into area hotels right near the Michigan City exit off I-94.