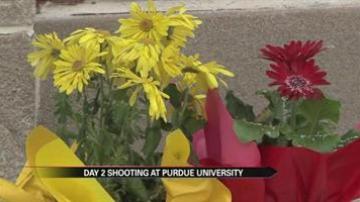 WEST LAFAYETTE, Ind. -- Classes at Purdue University were cancelled Tuesday and Wednesday because of the shooting at the electrical engineering building Tuesday around noon. Police have not released a motive in the shooting, but have said the victim appears to have been targeted.

The suspect, Cody Cousins, will have an initial hearing on Thursday afternoon.

The electrical engineering building reopened Wednesday. A memorial was set up outside to honor the victim, teaching assistant Andrew Boldt.

"I might feel a little weird, but right now, I don't feel unsafe. I just feel it's going to take some time to get over," said Purdue student Zach Wang.

Wang was in the classroom right above where the shooting happened.

He rushed out of the building when the fire alarm was pulled not realizing the gravity of the situation until police came rushing by.

"It wasn't until we actually got out of the building that we were all standing around that we were told to get inside," said Wang.

"I'd love to hear what motives he had and what people are finding out," said Purdue student Ian Kinsey.

Little has been released about the relationship between the victim and the alleged shooter, other than they were both teaching assistants for the same professor - but for different classes.

"We'll just have to go about our business and do what Purdue does - and that's go to school and study. We have to keep going -- we can't let it stop us," said Kinsey.

We tried contacting Purdue Police about the investigation, but they have not returned our calls.