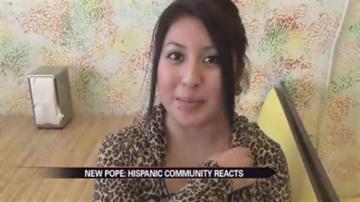 SOUTH BEND, Ind. – Pope Francis is the first to ever represent a Latin American country.

Many Hispanic Catholics have been waiting for the day when one of their own would represent them in the church’s highest position.

Many Hispanics in South Bend said it was time.

“I am pretty excited. I think every Latino is going to be excited,” said Maria Casteneda.

Casteneda says she is overjoyed that the Vatican has elected the first Hispanic Pope ever, Pope Francis of Argentina.

“The Hispanic population is the fastest growing segment of Catholicism,” said Mary Foley.

According to the Catholic World Report, 68 percent of Hispanics in the United States are Catholic.

Many Hispanics in South Bend already attend Catholic mass in their native language.

“I go to English. My mom goes to Spanish, but we do both,” said Casteneda.

“I go to the Spanish one and sometimes with my sister, I go to the English one,” said Amairany Plata.

Plata says now that there is a Latino Pope, maybe next we will have a Latino U.S. president.