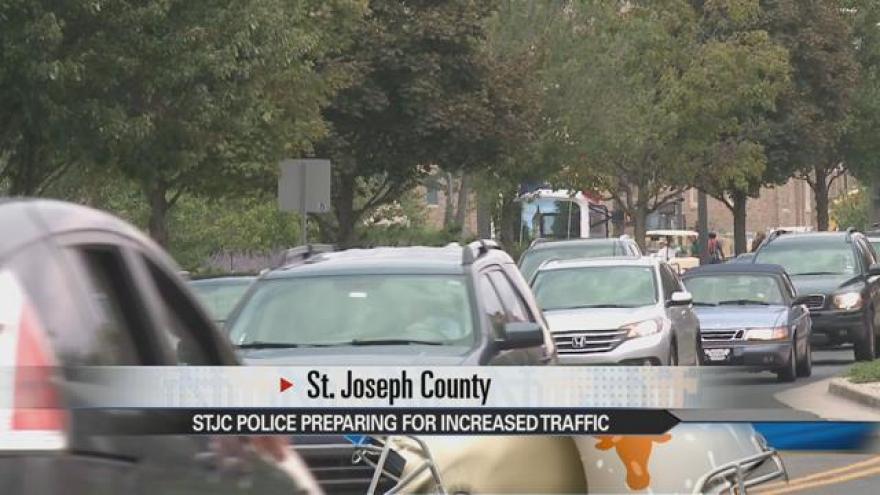 South Bend Police, St. Joseph County Deputies and the Indiana State Police Department are teaming up to makes sure close to 100,000 people can move in and out of South Bend smoothly.

The first Notre Dame Football game of the season is on Saturday but Lieutenant Gene Eyster with the South Bend Police says planning for football traffic starts in January.

The typical one way traffic pattern into campus begins on Saturday at 3:45 p.m.

Lieutenant Eyster says this will last until about an hour before kickoff, at 7:30 p.m.

Multiple representatives from the Olympic and Super Bowl committees have visited South Bend on football Saturday to study the traffic plan his department has put into place over the years.

“We’ve never ran into a situation where we run out of parking. We’ve always got parking. There is roughly 99,000 people that attend the game. We have parking, we like to believe somewhere in the area of 40,000 to 50,000 cars. Two people per car, that covers it and we still have people who park in the neighborhoods,” explains Lieutenant Eyster.

Saturday’s game is one of two night games this season and Lieutenant Eyster says night games do add some concerns.

Those concerns include more time to tail gate and then by the time fans get out of the game it’s dark. Lieutenant Eyster advises to be patient because his department prides itself in getting people out of the area in about an hour after the end of the game.

“During in bound traffic Douglas Road will remain open to two way traffic, which is unusual. Usually on a day game we would have it one way in one way out. The same way with Juniper Road coming down south off of Cleveland, that will be two-way traffic also.”